Should you cast your net where the big fish swim?

This is one of those “My dad used to say” homilies.  You’ve probably heard the accompanying “It takes just as much effort to sell a small deal as a big one,” over the years.

It is not that simple in the business world

The truth of this is more nuanced.  Some businesses will prosper in the shadow of larger 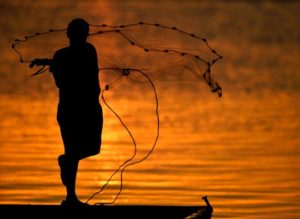 competitors by specializing in those smaller accounts that are just not attractive to those with higher overheads and larger aspirations.

But for most, the true sign of success and potential for even more is in the landing of a major account, one that validates the pricing, quality and competitive advantages of a company’s offering.  For this reason alone, it makes sense for most of us to aim high once we have worked the kinks out of our offering with smaller customers.

But readiness is the major test

On the other hand, the worst thing you can do is land a big fish when not prepared to reel it in.  It is hard to recover from any failure to perform, but doubly so when the customer is highly visible in the industry.  So, it is worth building the business’s capabilities through stages of customer size if the goal is to serve the biggest and outdistance the competition at that level.

How large a fish can you handle?

[Email readers, continue here…]   I have been on the board of a services company that specializes in the middle of the market, knowing that very large competitors throw lots of resources at the largest accounts – resources that our company just does not have. Rather 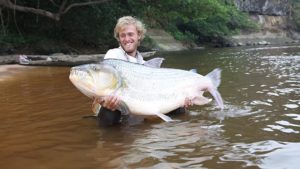 than being constantly beaten in this arena, the company has chosen to compete in an area of the market it can defend with superior service, which the larger competitors – with their higher cost structure – could not reproduce in smaller accounts without large losses.  Further, scaling the enterprise and its infrastructure to go after the few very large accounts would be at the cost of development for the midrange of the market and perhaps subsequent loss of that share to others.

A personal story about dealing with too large a company

And I am reminded of a cousin of mine who years ago sold custom window blind product to Sears, by far his largest customer, scaling his plant to produce more and more for Sears as orders flowed.  One day a sixteen-wheeler full of returned product drove into his loading area.  Sears, which granted a no-questions-asked return policy to its customers (even for customer errors in measuring their window blind orders) just dumped the product back on the supplier without explanation, nearly bankrupting the small company.

Even though there are many advantages to casting your net to attract the big fish, you should be well aware of the risks involved and have resources available to manage those risks.

This entry was posted in Growth!, Positioning, Protecting the business. Bookmark the permalink.

2 Responses to Should you cast your net where the big fish swim?