Assuming that a corporate whistle-blower is not tooting about you individually, such a class of people have been granted protections under the law and serve a function that needs to be acknowledged.

Motive of the whistle-blower

First, the assumption is that such a person is not making his or her gesture for personal 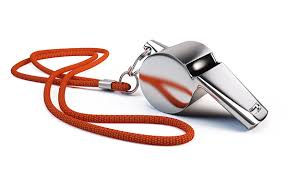 profit, but to give proper notice that there is something illegal going on within the company that the person cannot accept and must tell someone about.  Note that I use the word “illegal” to differentiate the tell-tale from the legitimate whistle-blower. A tell-tale almost always has a motive based upon political or personal gain, with the exception of when there is a perception or the reality of any form of sexual interference or bullying being reported.  That’s a subject for a separate discussion, and there are civil penalties as recourse for such proven behavior.

Are whistle-blower brave or are they tattle-tales?

Whistle-blowers, on the other hand, if not motivated by a personal reward, are often brave beyond need, risking job and reputation to call attention to an illegal act or acts.  If the person comes to you with evidence of such acts, you must act immediately to address the issue, often including reporting the incident to the authorities along with the whistle-blower.

That’s particularly tough if the consequence is going to be severe against the company itself.  But, if we have learned anything at all from the last several decades of such incidents reported from within highly visible companies, covering up the problem results in amplifying it beyond anyone’s wildest imagination.  Quickly dealing with it and the consequences always is the lesser of numerous alternatives.

Legal protections for the whistle-blower

[Email readers, continue here…]   And of course, the whistle-blower is protected by law and cannot be punished in any way for the deed of reporting a wrongdoing that breaks the law, whether later proved true or false.

Some agencies offer cash rewards for whistle-blowers that are in proportion to the amount recaptured by a taxing authority or penalties assessed.  Such rewards blur the heroic act into one where personal gain can easily be assumed to be more of a motive for a good deed than brave action. And there are raging arguments from company offices to the halls of Congress about whether a whistle-blower should or must first approach senior management within the company before reporting to authorities. But, no matter what the outcome or how high the reward, that does not change the protection the whistle-blower has under the law.

1 Response to Let’s talk about whistle-blowers