Will tech kill your job?

Stop me if you’ve heard this story before. “My job as a (newspaper publisher telephone installer, stockbroker, travel agent, retail store manager) is safe as this economy continues to grow.”  Yup. Thought so.

We are in a decade of creative destruction that will affect most everybody.  And the prime motivators of this massive destruction are the same class of entrepreneurs and innovators that have done it before.  This time they are aided by tail winds brought on by the rapid spread of access to the Internet.  In 1995, thirty-five million people used the Internet. That is six-tenths of one percent of the world’s population.  And only one percent of these who had access also had mobile phones.

By 2024, ninety percent of the global population will have regular Internet access.  Add that to the rise of robotics, artificial intelligence, biotech, genetics, and several forms of virtual reality, and we will soon see wonders we could only imagine a decade ago.  Meanwhile, in the U.S., an estimated five million jobs will be lost to tech innovations in the next five years, with two million new jobs created in these fields alone. 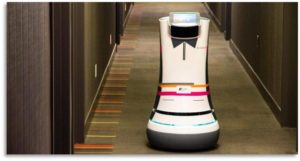 Robots will perform half of all manufacturing jobs by 2025, up from ten percent today.  Since 1999, the U.S. manufacturing workforce is down twenty-eight percent, and the U.S. has lost 54,000 manufacturing businesses.  In 1980, it took twenty-five jobs to produce a million dollars in manufacturing output. Today, that can be done with fewer than seven jobs.

Our current graduating class of college seniors reflect much of the past needs of our economic society, just as they did in the early 1970’s, when many bet that aerospace jobs would continue to be the hot job ticket.  The mismatch between what employers want today and graduating seniors majored in is striking.  For example, 81% of businesses hiring today want graduates with business or accounting degrees. But only 19% of seniors have majored in this.  Worse, 3.1% of seniors majored in computer science, while 65% of businesses looking to hire need these skills.

What general kinds of jobs will be lost to automation?  Almost eighty percent of jobs performing predictable physical work will be gone.  People in welding, soldering, working on assembly lines, food preparation or packaging of objects will be most at risk.  Then come the unpredictable physical workers.  Twenty-five percent of these will be gone, including jobs in construction, forestry and raising outdoor animals.

White- collar jobs most at risk to the rise of artificial intelligence and machine learning are those in middle management, commodity salespeople, journalists, report writers, and even doctors.

And the last jobs to be lost to automation and AI are, not surprisingly, K-12 teachers, professional athletes, politicians, judges, mental health professionals and coaches, advisors and motivators.

Tech entrepreneurs are out there in every corner of the world today finding ways to eradicate disease, provide clean water, change the way we deliver education, fight obesity and climate change, and reduce accidental deaths.  These heroes of the next generation are remaking our lives at hyper-speed.

So, will tech take your job, or your offspring’s job or your grandkid’s job?  Old jobs will be gone for sure.  But that same villain, tech, will prove to be a creator of jobs we can’t even imagine today, and will improve the quality of our lives immeasurably at the same time.

These are times to celebrate innovation and trust that, like many eras in the past, the world will be a better place in which to live and work because of their world-changing innovations.

This entry was posted in Hedging against downturns, Protecting the business. Bookmark the permalink.

2 Responses to Will tech kill your job?