September 21st, 2015 marks the sixth anniversary of publication for BERKONOMICS, the blog containing insights for business management, entrepreneurs, and investors.  Starting with just 4,000 circulation in 2009, BERKONOMICS has grown to well over 100,000, and 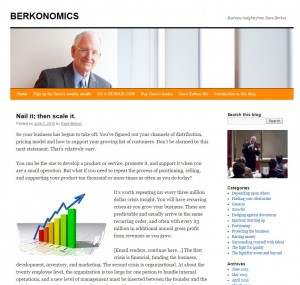 is read on five continents by an audience that is 45% female.  One third of its readers are aged 25-34.

Re-posted with permission by tens of blog sites, postings include Office Depot-Office Max, SoCalTech, LinkedIn Pulse, and numerous entrepreneur and angel investor sites in the United States, Canada and Europe.  Over 15,000 subscribers receive BERKONOMICS through RSS feeds, 50,000 by direct email, and 5,000 through LinkedIn, Twitter and Facebook – posted directly to those sites immediately upon publication of the primary blog each Thursday morning.  An estimated additional 40,000 circulation comes from re-postings.

BERKONOMICS, authored by Dave Berkus with occasional guest authors, has never missed a weekly installment in its six years of publication, and will have celebrated a searchable inventory of 312 posts on its anniversary date.

The series has been collected into three books, BASIC BERKONOMICS, BERKONOMICS, and ADVANCED BERKONOMICS, as well as a series of eight books in the SMALL BUSINESS SUCCESS collection, each of the books in the collection addressing a single subject in depth, from starting up through management and marketing to a successful exit.

1 Response to BERKONOMICS CELEBRATES 6TH ANNIVERSARY WITH OVER 100,000 CIRCULATION