Leadership: Sell the dream while making the reality.

As a leader, you set the goals, establish the strategies and tactics to get there (with help 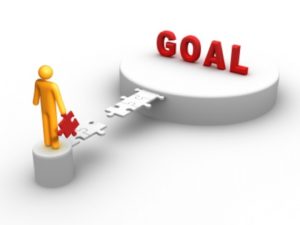 from others of course) and sell the dream to all your stakeholders.  And that includes potential customers as well as executives and employees.

Can unmanaged growth ever happen?

Sometimes growth happens without a leader envisioning it, living it daily, evangelizing it to anyone who will listen.  But not often.  More often, you (the leader) set the goal and push for achievement – hopefully establishing a realistic set of strategies and accurate metrics to measure progress along a timeline.

A leadership goal vs. a mantra:

I once sat in on a roundtable meeting in which the executive of a company stated his goal as “educate the world.”  To be fair, he followed a bit later with a goal of thirty million dollars in revenue within five years, which got my attention.  The first statement was a mantra, a vision, a rallying cry.  But when he did state a monetary goal, he started a real conversation about how he will achieve it and with what resources, and which of several focused revenue models.

Note that “Educate the world” elicited little response until the group saw the financial goal.  Your executives, board and others will surely do the same.

So, which one is actionable?

[Email readers, continue here…]   You will have sold the dream – one that is tangible and actionable.  So that is the challenge you won’t be able to avoid.  With that number out there, you will be held accountable by your board (and hopefully yourself) to make this happen in the time period stated.

Is this different from the “vision thing?”

For sure. Leaders lead. Managers execute the plan.  You will have just set in motion a whole series of events which might never have begun without your establishing, then selling your dream that you set in a tangible form.

Make that your new reality.

This entry was posted in Finding your ideal niche, Growth!, Positioning. Bookmark the permalink.