Can you stretch the truth to make your point?

How easily it happens…

Sometimes it is easy for someone to make a statement that, in the enthusiasm of the moment or to make a point, crosses the line between fact and fiction.  Sometimes it seems 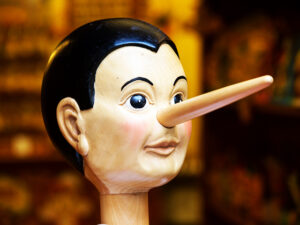 to you to be just an unimportant little stretch of the facts. An estimate of the number of customers, of the amount of traffic to your website, of the numbers of products sold or hours spent in development – there are thousands of areas where a number sounds better when it is larger.

What are the risks when there is no authority?

Often, the number you state cannot easily be challenged, sometimes justifying the use of a larger number as a way to impress at potential customer or make a point at an industry meeting.

Ah, but then there is the Internet.

In this age of readily available information, the risk involved in making a statement that can later be proved untrue is too great.  It goes to your credibility itself when discovered or challenged.   And often, when someone discovers or uncovers the truth, you will never hear of it, even as that person lowers his or her trust in your future statements by some level as a result.

[Email readers, continue here…]   Yet, we have all done this in one form or another, some harmlessly, some with intent to deceive.  An often-expressed example seems to come from the salesperson who quotes a larger number of users or customers than the facts support.  Yes, we’ve seen gray areas.  In one example in an industry that I know well, there are direct 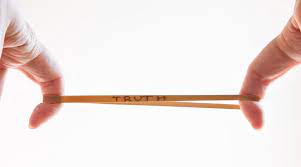 customers and then central systems that in turn support direct customers.  The company in mind provides systems to serve both, but its salespeople count as customers all the indirect customers served by the one system sold to oversee them.  The result is an inflated number of total customers, which when compared to the competition counting only direct customers, makes the company look much larger and with greater market share.

Is there any harm in this activity?

Yes, in two ways, this hurts credibility and confidence.  Competitors have every incentive to research the truth of your statements and every incentive to broadcast findings of inaccuracies.  And the creator of the knowingly inaccurate statement will always be a bit wary about being challenged, sapping just a bit of energy away from other communications with the same constituents, and knowing that a previous statement is vulnerable to attack.

It is best just to not make those stretch-the-facts statements in the first place.  They probably don’t do the job expected in enhancing the person’s or company’s reputation as intended anyway.

This entry was posted in Growth!, Protecting the business, Surrounding yourself with talent. Bookmark the permalink.

2 Responses to Can you stretch the truth to make your point?