Have you fallen into the buggy whip trap?

Surely, you’ve heard the buggy whip analogy.  A business making those necessary items ignored the signs of progress and found itself without a market.  Perhaps that happened to sword smiths upon the invention of the rifle, and certainly to the makers of cassette tapes upon the dawn of the CD.  And CD’s with the advent of streaming.

My stories of unexpected change

I found myself in the middle of such a slow-rolling change twice in my career.  First, in the 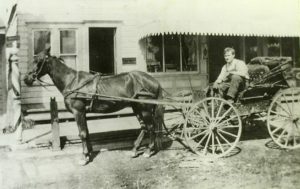 late 1960’s (yes, I know, a long time ago), there were 31 phonograph record manufacturing plants in Southern California alone.  By 1975, there were only two.  That is sudden change, brought about by the fast acceptance of the cassette, which in turn gave way to the next technology, CDs, after a rather short lifecycle.  Record plants were noisy, dirty places, using chemicals I can only imagine now rest somewhere in the ocean, to electroplate the “stampers” and press the records.  Cassettes, in contrast, could be manufactured in small rooms with much less expensive equipment and no damage to the environment.

The second time I learned the buggy whip lesson was at the dawn of the personal computer age, and this time we guided our firm without a hitch from minicomputers to networked PCs, even growing the business as we gave up the lucrative $100,000 hardware sales in return for service fees to network our customers’ systems, install our database, and migrate to customer-purchased desktop and servers.

Today the speed of obsolescence is even faster

[Email readers, continue here…]   Here it is, not so many years later, and the signs are more subtle yet, but the speed of obsolescence is much faster.  Take for example, the public’s quick acceptance of Facebook, Instagram, Twitted and other social networking portals, leaving early leader MySpace wondering what happened to their comfortable lead and large fan base.  With rapid sharing of information and recommendations, a fickle public can change its mass preferences seemingly in an instant.

The big question: How to spot the real thing?

How do you spot the buggy whip trap and differentiate it from a simple business cycle slump?  The answer is simple, but somehow out of reach for most senior executives and entrepreneurs.  Micro trends may seem to be a whisper, as mini-trends follow with leading adopters making a bit of noise.  It is those leading adopter founders and managers that take the chance on new technologies, new companies, new styles, and new idioms.  That is why so many larger companies pay specialty marketing firms to find, court, and listen to those individuals who lead the pack in taste and action.

No expensive consultants? Consider this alternative

For those of us who don’t have the resources to hire these expensive market trend-watching firms, there are simpler yet effective opportunities.  Usually, technology and style trends begin with those aged between 15 and 23.  And which of us doesn’t have at least one close relative or child at or near these ages?  Have you ever asked for an hour of such a relative’s time to discuss what’s “cool” or “coming” or “must have” in their lives?

Resist your “resistance to change”

It is human nature to protect your investment of money, time and brand in your enterprise.  That leads naturally to a resistance to change and inability to willingly move to replace your own product with something new that will kill its revenues.

But we all know that if we do not do it when offered the evidence of product or even industry obsolescence, someone else will jump in to fill the void.   Think carefully for a moment: are you investing in your own form of buggy whip product or service today?

This entry was posted in General, Protecting the business. Bookmark the permalink.

1 Response to Have you fallen into the buggy whip trap?