How can you let a talented employee go to pursue a new career?

It is tough to lose your best employees wanting to advance their careers.  Sometimes you can be the coach, helping them even if it means losing them.  And, as in today’s story, sometimes it can mean the beginning of an amazing journey leading to a story for the ages…

We’d all like to retain our best managers and employees forever or at least for as long as possible.  But sometimes our corporate wants and needs conflict with what is best for an employee and his or her career development.  We cannot legally stand in the way of an employee resigning to pursue a dream, but we can leave a bad taste with that person and chip away at our corporate culture by not cooperating or even helping the employee move on.

It doesn’t take much to publicly wish a departing employee well, to throw a small celebration, to coach the outgoing person if asked, and to listen and receive fair criticism at the moment of the exit interview.

And sometimes, the story that results is one that joins the ranks of super-tales, to be told again and again.  Here is one such departure story I tell often. 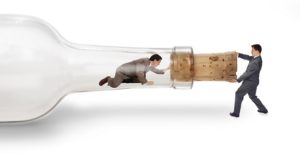 company, with 26 programmers in his fold.  The company had grown to 233 employees and served 16% of all automated hotels worldwide at that time.  Each week, Tom and I would have an informal lunch and discuss issues that ranged far and wide.  Tom almost always had ideas to contribute, particularly about marketing programs and opportunities.

How to handle it when a valued employee wants to move on?

[Email readers, continue here…]  One day Tom came to me and said, “I want to transfer to marketing. I am tired of programming.”  “But Tom”, I protested,” you are in charge of the family treasure.  All of us depend upon you.  Oh, the humanity…”  Tom insisted, and nothing I could say would stop him from resigning, selling his home, and moving away. Five years later, I received an email from Tom.  I keep that email in my leather note portfolio, carrying it with me wherever I go, pulling it out often to read portions to audiences during my workshops, or just for fun to fellow private equity investor friends.

An email to preserve and show

“Hello again, Dave,” it began. “After looking around a lot, I have landed as employee 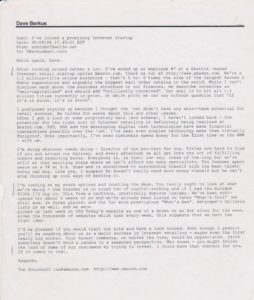 number seven at a Seattle-based startup called Amazon.com.”  Tom goes on to extol the opportunities, describe his job in marketing with creative opportunities at every turn, and then… “My founder is in round two of capital-seeking, looking for increments of $100 thousand, and if you’d like, I’d be happy to introduce you…”

In one of the most understated several word paragraphs in history, I responded by email, “Gee, Tom. Good to hear from you.  Keep me informed.”  After recounting this story, I then ask my audience to guess what an August 1995 angel stage investment in Amazon might have been worth at the IPO, getting lots of range in the responses.  The answer is $33 million.  $33 million return from $100 thousand investment, or 330 to1. That story always gets a laugh as most everyone of us recalls the deal we didn’t do, the investment we didn’t make, the opportunity we shunned that turned to gold.

And it can get better over time

After telling that story recently to a large audience at an international meeting of early stage investor group managers, two of them pulled me aside as I came off the stage, showing me their iPad graph of where Amazon had grown to by then. If held for all those years, that $100 thousand investment would have been worth over ten billion, then stated.

So, you never know what good things will someday come, especially from talented, driven associates you nurtured but released into the wild when their time had come.  Or whether you should invest in those who introduce you to a new opportunity as a result.

2 Responses to How can you let a talented employee go to pursue a new career?