Love letter to a … battery backup.

Well, if you’ve had a computer long enough, it has certainly happened to you.  Power surges, power outages, surges upon reinstatement of power, low or high voltage from your utility (brownouts or surges.)  I’ve had all of these over the years and lost equipment from motherboards to microcells.  And I’ve lost data due to sudden power loss.  I have worried over every wind storm or thunderstorm.

So, several years ago I installed a whole-house surge protector in the master electric panel 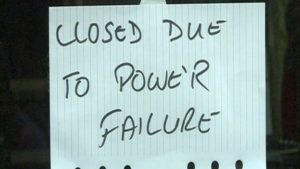 to help the individual surge protectors between plugs and all equipment.  I had long-since added a battery backup for my dual-screen monitors and computer.

But none of this helped in a recent power outage, when reinstated power blew the microcell, requiring a repurchase and days of no cell service inside my home (which is too far from public cells to get a single bar.)

I searched for and found a solution that is one of the rare purchases of equipment that makes you actually smile when you open the package and install the equipment.  Apple and Samsung do that with elegantly packaged, beautiful hardware, presented in a clean package with easy instructions and a “wow” user experience upon first use.

Would you believe that this time, I got the same “wow” from a … battery backup?  My “old” battery backup could keep my system running for four or five minutes, enough to quickly sign off and protect data.  It did not do anything to protect against the surges that damaged my motherboard.  This new unit, “a sine wave battery backup” from CyberPower, came wrapped as if it were an iPad, with plastic peel-off protection across the entire case, minimal and clean instructions, and then the surprise.

An included USB cable connected my computer with the battery backup. After downloading the software, suddenly my computer began telling me information I never had before – the percent charge of the battery, the number of watts my system was drawing, the minutes of battery runtime available during a blackout, the variation in voltage coming from my utility.  Wow!  I could even set the acceptable voltage variation before the power protection in the unit took over and smoothed the sine wave to protect my equipment.

Sine wave?  That’s the rest of the love story.  I discovered that this is more than a battery backup.  By smoothing the utility’s signal into a very sensitive AC current wave (sine wave), my sensitive equipment and energy star certified electronics are actively protected for the first time. And I have 35-40 minutes of power in the same size case as my old backup.

This unit even smells like a new car for now.  But enough gushing about the features.

If you haven’t, you will someday suffer power problems that will damage your equipment and perhaps destroy some or much of your local data.  Do you want to wait until that day to reform, and later write your own love letter to a battery backup?  Didn’t think so…