Is your budget a forecast? When do you change mid-course?

Hold it! These are confusing terms. When does a budget become obsolete? Do we rely upon constant changes and call it a forecast?

So, let’s spend a few moments defining this sometimes-confusing set of terms.  A budget should be created each year after a series of negotiations between departmental managers and their superiors all he way up to the CEO, all in support of the next year’s tactics previously agreed upon (which in turn support the longer-term strategies leading to the next goal beyond). 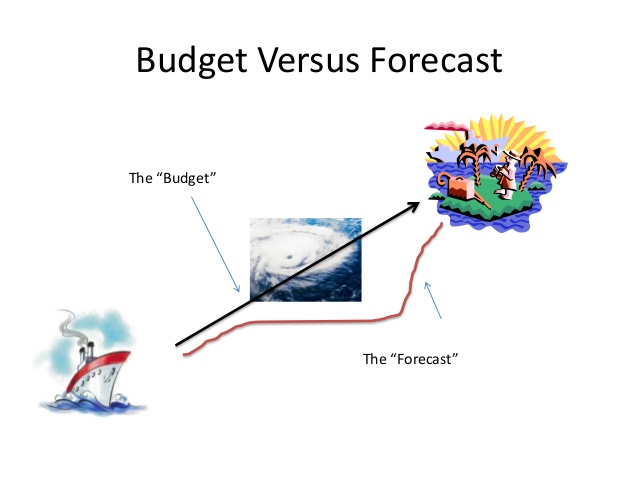 Here is the punch line: a budget sets the limits upon spending for the next year – limits negotiated between the players.  An important part of the budget is expected revenue for the coming year, a critical factor in setting hiring and resource expectations for the year.

But during the year, if the forecast revenues fall short or are greatly exceeded, it is fair to revise the budget and rethink your hiring and resources.  Otherwise, it is the expectation of the board of directors of a company that each year’s budget be approved in advance and adhered to as long as revenue goals are met.

[Email readers, continue here…]  Note that I used the term “forecast” for revenues for the next year.  The term is also used when projecting revenues for succeeding years. The term “forecast” is a bit confusing, because it is also used by some as a measure of expected revenue and expenses to the end of the current year, found by taking actual performance year-to-date and adding best estimates of remaining revenues and expenses for the rest of the year to obtain an expected or “forecast” outcome at year end.  Both uses of the term are common.  Just be sure all who participate understand which use of the word is the current one.

The real point here is to create a financial plan to support the strategic plan, marrying them in harmony one with another.  Many entrepreneurs are impatient by nature, not the best of detailed planners.  Yet, with the assistance of those in support such as the CFO, everyone in management must be aligned in a single direction, with the budget reviewed and updated annually as accomplishments, the marketplace, and even the competitive landscape change.

1 Response to Is your budget a forecast? When do you change mid-course?